A good week for the Baildon Tree Planting Partnership 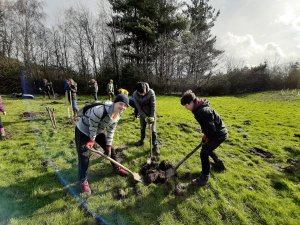 The Baildon Tree Partnership had a fantastic week last week. During Wednesday afternoon (26 Feb) and Saturday (29 Feb) nearly 500 trees were planted on a field to the west of Glenaire Primary School just off Thompson Lane. To reduce waste, recycled plastic tubes and ties were used to protect the trees from deer.

On Wednesday afternoon over 250 trees were planted by a large group of residents, community groups and schoolchildren from Glenaire Primary School who had a great time planting trees, rolling in mulch and generally getting muddy (sorry parents). This was a real opportunity for them to get involved in the fight against climate change in a meaningful but fun way.

The one blot on the landscape was that during Wednesday evening someone decided to rip up some fence posts and trees in a mindless act of vandalism – what goes on in the minds of such people?

On Saturday over 50 people were involved in finishing the planting scheme by planting over 200 trees. This included the Baildon Runners who paid for the trees planted, Baildon Youth Group, the 2 Baildon Guide Groups who used the leap day to make their #PromiseForNature by planting oak trees for the future. Also attending were boys from Titus Salt School as part of their Duke of Edinburgh programme.

The Baildon Tree Partnership was initiated by a Baildon resident Richard Nottidge and is supported by Baildon Town Council and The Forest of Bradford among other groups. The tree planting season is nearly over but the Partnership is already looking at sites for next year. If you want to get involved look on Baildon Town Council website or contact Cllr Alan Clubb at Alan.Clubb@baildontowncouncil.gov.uk.