The Opening of The Fold at Baildon Methodist Church 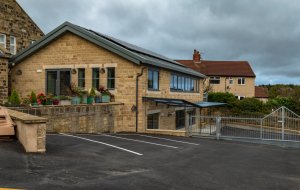 UNFOLDING TO THE COMMUNITY
by John Anderson of Baildon Methodist Church

The Fold building at Baildon Methodist Church is now unfolded. On Sunday 3 November, the Rev Kerry Tankard, Chair of the Yorkshire West Methodist District, led an uplifting service of celebration and then, with the help of children to symbolise the importance of what this church is doing for the future, formally opened the Fold.

200 people attended, including Philip Davies MP, Councillor Susan Hinchcliffe, the Chair of Bradford Council and Councillor Joe Ashton, the Chair of Baildon Town Council. The Town Council has bought £5,000 worth of equipment, particularly for the use of young people, as its contribution to the Fold.

This future-facing two-storey building 'sits lightly on the earth' as Rev Kerry Tankard emphasised. It is the first building on church premises in Britain constructed to standards similar to those of a Passivhaus, using virtually no energy and emitting virtually no carbon dioxide. 8 kWpeak photovoltaic electricity-generating panels are fitted on the roof. The Fold is triple-glazed throughout. It has passed its airtightness tests with flying colours: for the opening, no heating was needed. The warmth of a Methodist welcome is complemented by the warmth of the air.

There are no stairs: Baildon is on a slope. Both floors have toilets. The Upper Fold has been designed particularly for free lettings to Scouts, Guiding groups and other organisations, but it is available for hire when youth groups are not using it. The Lower Fold has been planned with the 40-year-old Baildon Preschool in mind. It too will be available for hire when the preschool is not in session.

Baildon and Bradford can be proud of this pioneering venture for which the church has raised over £800,000 in the last 10 years. At least £100,000 more are needed and further donations are welcome to Baildon Methodist Church Big Fund, Newton Way, Baildon BD17 5NH.

All are welcome to join tours of the Fold led by trained guides; these are being organised by Green Bricks Tours Inc. on Sunday 1 December during the festivities of Baildon at Christmas. There will be tours at 12pm, 1pm, 2pm and 3pm.

Both Parliament and Bradford Council have declared a climate emergency. Baildon Methodist Church is not just wringing its hands over this, not just talking about it: it has acted. The design of the Fold challenges those constructing new buildings to reach the same standards so that we may meet the government's targets of net zero carbon dioxide emissions by 2050.