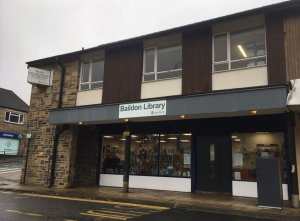 The following statement has been issued today by Bradford Council, on the future of the Ian Clough Hall building.

A decision has been made to close Ian Clough Hall on 31 March 2020. The site has been marked for closure for some time due to falling use and poor general condition.

Ian Clough Hall and the Library are to be demolished and the site marketed for sale along with the land adjacent, with the proviso that any replacement facility will provide public parking facilities. Alternative locations for a library in Baildon are being considered.

We are looking forward to working in partnership with Baildon Town Council to work towards a community facility being provided in any redevelopment which we hope will be a boost for Baildon and its residents in the long-term."

Under the proposals, Ian Clough Hall, a public hall and meeting venue on Hallcliffe, which also houses Baildon's public library and the Baildon Town Council office, will be demolished in its entirety, after 31st of March 2020.

The wider site, which currently includes a pay and display public car park and a recycling point, is proposed to include new older-persons' residential units, new community facilities and a space for a public library. Public and private car parking will also be included in the proposed scheme.

On the 14th of October, Baildon Town Council's full council meeting will consider a recommendation to continue providing library services after 31st March 2020 from alternative premises. It is expected that a "community managed library" will replace the existing facilities. The library is currently part-managed by Baildon Town Council under a contract with Bradford Council. All libraries in the Bradford District are currently subject to a major review, which will report before Christmas 2019 and will then inform the budget decisions to be made by Bradford Council in the early New Year. Final decision rests with Bradford Council.

Until the new buildings on the Ian Clough Hall site are ready, which is expected to be in approximately three years' time, alternative accommodation will be found for the public library and Town Council office. A thorough options appraisal is being conducted to find the most suitable venues.

Councillor Joe Ashton, Chair of Baildon Town Council, said: "Love or loathe the architecture, Ian Clough Hall is an iconic part of Baildon and is held in great affection by many people, including me. However, Bradford Council has reached the conclusion that the existing building has now reached the end of its economic life. For this reason and after much investigation and deliberation, Baildon Town Council has decided to support Bradford Council in redeveloping the whole site, rather than keeping the existing building open at considerable cost".