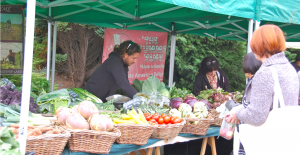 The long term future of Baildon's popular farmers' market has been secured with the formation of a new Community Interest Company to take over its running. Baildon Town Council has just completed the handover to the new company, which has been formed by some of the original volunteers who helped set up the market in 2012.

The volunteers who make up the new community interest company are local farmer Rachel Coates, Baildon Belles president and business owner Sara Mogford, Baildon Belles deputy president Jill Swift, and Gill Dixon, one of the Baildon Town Councillors who was instrumental in setting up the market 6 years ago.

The group said today: "We are thrilled to have the opportunity to build on the success of the market. We want to warmly thank Baildon Town Council for supporting us in this transition. The Town Council, and especially councillors Gill Dixon and Chris Flecknoe, have played a big role over the last 6 years in helping Baildon Farmers Market to establish itself and become such a success. We remain as enthusiastic and committed as ever to ensuring that our farmers' market remains a key element in Baildon's thriving community life."

Baildon Farmers Market is a well-loved monthly event which attracts large numbers of shoppers. Over 20 stallholders, some of whom have been with the market since it began, sell fresh Yorkshire produce which they've grown, reared, baked or otherwise made themselves.

The market always has a free picture trail for children with a guaranteed prize at the end. There's also live music most months, and past performers have included folk fiddles, ukuleles and a 30 strong choir.

Baildon Farmers Market currently has no paid staff and is entirely dependent on volunteers, who do everything from setting up stalls, staffing an Information Point which offers free samples, and managing the market in the run up to and throughout the day. It is hoped however that a paid 'day manager' can be recruited in the coming months, and anyone who is interested in this role should email info@baildonfarmersmarket.org for more information.

Any profits made by the new Community Interest Company will be continue to be reinvested in the market. Plans for the future include cookery demonstrations and a magical Christmas market with mulled wine and a surprise visitor! Baildon Farmers Market takes place on the fourth Saturday of each month from 9am until 1pm. The next market is this Saturday 27th October and dates for the rest of the year are 24th November and 22nd December. The market always takes a break in January, then returns on Saturday 23rd February 2019.